The Zepatier tablet, which contains 50mg elbasvir and 100mg grazoprevir, can be given as monotherapy for 12 weeks in patients with hepatitis C genotype 1a, 1b or 4, with or without compensated cirrhosis. For those with genotype 1a or 4 infection who have HCV RNA >800,000IU/ml, treatment in combination with ribavirin for 16 weeks may need to be considered.

The safety and efficacy of elbasvir/grazoprevir with or without ribavirin were evaluated in eight clinical studies involving approximately 2000 patients with chronic hepatitis C of various genotypes. Efficacy was demonstrated against genotypes 1a, 1b and 4. 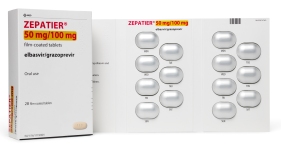 The primary endpoint in all studies was sustained virologic response (SVR), defined as HCV RNA less than the lower limit of quantification at 12 weeks after the end of treatment.

The C-EDGE TN study evaluated elbasvir/grazoprevir for 12 weeks in 421 patients with or without cirrhosis. Of the 316 patients receiving immediate treatment, 299 (95%) achieved SVR (95% CI 92—97%). SVR was achieved in 97% of cirrhotic patients and 94% of non-cirrhotic patients.

C-SURFER evaluated the combination in 235 adults with chronic kidney disease stage 4 or 5, including patients on haemodialysis. Following 12 weeks of treatment with elbasvir/grazoprevir, 99% of 116 patients achieved SVR.

Elbasvir/grazoprevir was generally well tolerated, with fatigue and headache the most commonly reported adverse effects.

NICE has approved elbasvir/grazoprevir for use in patients with genotype 1 or 4 hepatitis C.

INR should be monitored closely in hepatitis C patients...

Clinically significant arrhythmias have been reported...

The launch of Olysio (simeprevir) provides a further...

Join us for a short webinar series offering insights...

The MIMS table 'Antidepressants, a guide to switching...

New advice on vitamin B12 monitoring in patients taking metformin

Patients on metformin treatment with risk factors for...